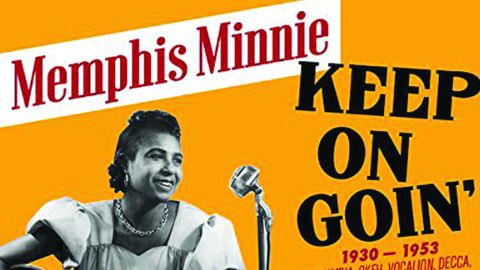 When Memphis Minnie made her first recordings, in 1929, she was 32 – a contemporary of Tommy Johnson, a few years older than Son House and Skip James. More than 20 years later, when all those men were forgotten, she was still drawing an audience in clubs, still making records. Her professional career in blues is matched by no other female musician, and by very few men.

How she managed that is clear from this compilation, from the intricate guitar duets of the early 30s with her then-husband Kansas Joe McCoy through the small-band sides of the later 30s, the plugged-in 1941 recordings with her next husband Ernest ‘Little Son Joe’ Lawlars such as her hit Me And My Chauffeur Blues, and the still-punchy music she made in the 50s like Kissing In The Dark and Broken Heart. What Minnie had was adaptability. Like Big Bill Broonzy, she heard how the sounds and themes of the blues were changing with the times and she kept pace with them.

Listen to the shift from the gentle rural rhythms of her first success, Bumble Bee from 1930 to the biting guitar line and vituperative lyrics of Killer Diller Blues from 1946, or the party harmonising on the following year’s Shout The Boogie. Johnson, House and James were greats, but this kind of musical re-invention would have been beyond them.

She did have excellent help. Kansas Joe and Little Son Joe were adept guitarists, and she could draw on pianists like Blind John Davis or Black Bob. But she could carry a song perfectly well by herself, as numbers like Chickasaw Train Blues or Butcher Man Blues demonstrate with their easy-swinging guitar lines. And always there’s that confident, sexy voice, the sound of a tough cookie with a velvet tongue, heard to particularly moving effect in her tribute to an earlier blueswoman, Ma Rainey, and a song that may be autobiographical, In My Girlish Days.