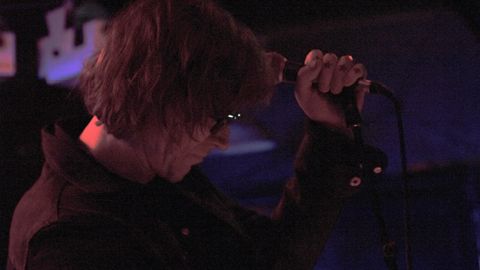 A maverick independent record label that has outlasted and outshone its contemporaries by avoiding trend-chasing, it seems fitting that Heavenly Records have chosen to celebrate twenty-five years of business with four days of gigs in a Pennine valley town far off the music industry’s beaten track. Historically a strong-hold for radicals, bohemians and anarchists, Hebden Bridge seems an equally apt destination for Mark Lanegan to begin a European tour in this Labour Party-owned former working men’s club.

For despite all his alt-rock credentials – in Screaming Trees and Queens Of The Stone Age, and working with everyone from PJ Harvey to Duff McKagan – like label and town alike, Lanegan exists best on the margins. He’s a much-admired musical outsider. He does things his way; the world comes to him. And with three albums in three years he doesn’t fuck about.

Little wonder then that Mark Lanegan is met with the reception normally reserved for reborn messiahs. After a perfectly-matched opening set from Duke Garwood, whose widescreen musical vistas merge Ry Cooder moodiness with the portentous elemental blues of Earth, Lanegan begins sparsely and slowly with the stripped-back When Your Number Isn’t Up. From here on in his gaze pierces deep into the dark American psyche; this the land of True Detective, the cinematic output of Jim Jarmusch and David Lynch, or the scorched literary hinterlands of William Faulkner and Cormac McCarthy. The song titles alone read like a list of great novels not yet written: Death Trip To Tulsa, Torn Red Heart, I Am The Wolf.

Tonight is a masterful exercise in slow-building drama, as drum patterns and added keyboard flourishes are gradually layered onto the rudimentary guitar and vocals basis of the opening songs. Such textures help move Lanegan away from the inevitable Tom Waits comparisons that have followed him – largely in part because of a voice that’s as distinct and comforting as an old tobacco-seasoned leather chair – and on towards something more ethereal. The backdrop to No Bells On Sunday and Ode To Sad Disco almost recalls those moments when Joy Division re-emerged as New Order. Early 80s synth-pop and post-punk are here tonight in spirit.

For the ardent fans there are two songs from the Soulsavers project, Lanegan’s collaboration with English producers Rich Machin and Ian Glover – the beautiful plaintive soul of Deepest Shade, which sees the singer emoting in warm tones to match Louis Armstrong, and the uplifting gospel electronica of Revival. For all Lanegan’s reputation as a grizzled modern blues bard of back-room bars, there’s so much more going on here than he’s given credit for: trip-hop, electronica and beats all pepper the set, with the skittering rhythms and gnarled croon of final song The Killing Season the perfect conclusion in what has been an hour-plus exercise in tension-building and narrative-weaving.

And throughout it all, as the room’s temperature rises, Lanegan remains a human shadow, his wolfish features seemingly cast in perpetual half-light, wizened and world-weary, but with enough gas still in the tank to suggest that this man is going to be squinting out across future horizons for decades to come.