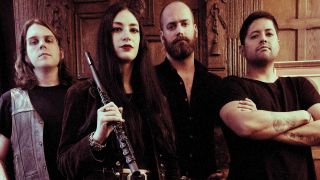 Canadian quartet Blood Ceremony’s style emulates 1970s prog rock and 1960s psychedelia while skilfully flirting with occult imagery and Hammer Horror-influenced lyrical themes; and it all started with the inclusion of a flute.

“I guess the band really started when Alia [O’Brien, singer and flautist] came to practice with her flute,” muses guitarist and lyricist Sean Kennedy. “We started messing around with different riffs and we realised that it sounded really cool when she played along. We went from there and started writing songs that went in that kind of direction. That was really what developed our sound I guess – psychedelic riffs and flute.”

Indeed, with her enchanting looks, powerful voice and Jethro Tull-style flute solos, Alia is a captivating and unique frontwoman. She and Kennedy started the band 10 years ago, which is completed by Lucas Gadke on bass and Michael Carrillo on drums. They’re just about to release album number four, entitled Lord Of Misrule, the follow-up to 2013’s The Eldritch Dark. It’s a bewitching blend of doom and psychedelia, that’s rooted not in the culture of their Canadian homeland, but in English soil. Not only are they signed to a British label, Rise Above Records, and recorded Lord Of Misrule with producer Liam Watson at Toe Rag Studios in London, but their close relationship with England is also reflected in the lyrical and musical themes of the album.

“A lot of our influences for this album come from British folklore, and we recorded the album in London. It put that British stamp on it for us,” says Kennedy. “This is the first time we were able to record entirely to analogue tape. So if you buy the vinyl version of the album, it has never been digitalised from the tape, to the mastering, to the vinyl. It was such an exciting way to record the album.”

The band also take a particular liking to British horror films. “Every one of us in the band really loves European horror movies and I guess there’s a type of English horror film that is a little understated and a bit more atmospheric like The Wicker Man,” Kennedy explains. “I’ve always been inspired by these types of films for our lyrics. The band’s sound fits in well with those notions of hidden paganism.

“There are a couple of movies that influenced us for this album: The lead off-track on the album called The Devil’s Widow is based on the 1970s British film of the same name, which is in turn based on the Scottish tale of Tam Lin. It’s about a head witch who is controlling these young people and trying to keep them in her harem. Then the dilemma lies when people try to break away from her. The film is really cool, and it’s an example of how different styles and inspirations find their way into different songs.”

One look at the eerie artwork of the album gives their interest in the dark side away: the band surrounded by burning incense, a ceremonial dagger and Alia majestically perched on a throne. It makes you wonder… do they practice what they preach?

“In terms of us being practising occultists – it is an interest but not an activity,” explains Kennedy. “A lot of the occult broadly is tied up in the origins of being creative. There is a lot of occultism in performance and in music. We respond to songs, rock’n’roll and popular music in very powerful ways. I think that there is an occultism behind all kinds of popular music.

“In British heavy rock, there have always been figures who have been into the occult like Jimmy Page or Mick Jagger, Ritchie Blackmore,” he continues on the occult’s place in rock. “I had a friend who ran a record shop in Toronto and he always hated Led Zeppelin because he was convinced that Jimmy Page was a witch!”

Another influence on the band’s music and aesthetic is their nostalgia for the 60s. This is evident on flower-power ballad The Flower Phantom, an ode to the decade of experimentation, free love and the Beatles.

“Alia wrote The Flower Phantom,” says Kennedy. “She always comes up with those left-field, 60s-inspired songs. It has a bit of a soulful feel to it as well and it’s one of my favourite tracks on this record. Liam Watson and Alia are big Beatles fans. I think that the two of them added a few Sgt Pepper… elements to that song.

“Lord Of Misrule was always the working title,” he continues. “It’s the idea that there is still an ancient past bubbling beneath the surface; a mystical being who puts together all of these parties and gatherings. It sounded like a good idea for a rock record!” And, indeed, a good metaphor for Blood Ceremony themselves.

Lord Of Misrule is out now on Rise Above. Visit the band’s Facebook page for more.