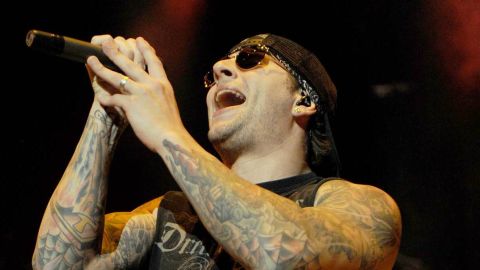 Days before Avenged Sevenfold were slated to play a stadium gig with Metallica, the California band announced a surprise club show at Minneapolis’ First Avenue – one of the country’s most renowned independent venues.

Since last they trekked the globe, Avenged has been somewhat in limbo. Last summer they parted ways with drummer Arin Ilejay while quietly working on a follow-up to 2013’s Hail To The King. In January, news broke that their label, Warner Bros, is suing them for trying to walk out on their contract. The court fight looms over the band’s still-incubating seventh studio album, raising questions about when it might surface.

So while Thursday’s club date (free for the first 1,500 fans through the door) was billed as a low-key test run for new drummer Brooks Wackerman, it more importantly served as an intimate State of Sevenfold Address. The message? The Orange County boys have returned and they haven’t missed a curb-stomping beat.

Anticipation snowballed as fans waited in line for hours to catch Avenged in the packed mid-sized club instead of the arena across the street. Shirts are already being shed as they come out firing with Nightmare – the melodic anthem sounding like a riotous Metallica/Guns N’ Roses mashup. Dexterous fans shoot jittery cellphone videos with one hand, fist-pumping with the other during the biting rendition of Critical Acclaim that follows.

“I feel like we’ve been away for a long time and we’re finally back,” declares frontman M. Shadows, shrouded in sunglasses and backwards baseball cap.

Shadows proves he’s still as poised as metal singers get, belting the mighty chorus of Hail To The King, which he dedicates to late hometown pop icon Prince. Gesturing like a sinister concierge, his brawny voice soars to near Dickinsonian heights during the anthemic tribute.

Avenged’s overdue return feels as much a release for the band as it does the sweaty, eager crowd. Gliding and bobbing across the stage, bassist Johnny Christ carries the rhythmic undercurrent to a charging Almost Easy, wearing a mischievous grin all the while.

The Californian quintet draw almost equally from their previous albums during the 90-minute set. Fans hoping for a taste of the new stuff will have to wait at least until Saturday’s show, for which they promised a different batch of songs. Coming off their most cohesive album since shifting from their metalcore roots to their ‘70s British metal/hard rock splice, eyes are on them to see where they take their sound next.

If the new guy behind the kit has anything to say about it, that next step might be faster and harder. Wackerman seems most comfortable with uptempo burners, sliding seamlessly into the galloping Beast And The Harlot chorus and flashing a roll-and-crash flair on an extra manic Bat Country. A drummer as capable as Wackerman – who has worked with artists as disparate as Suicidal Tendencies and Avril Lavigne – deserves the benefit of the doubt that he’ll eventually find his stride with Avenged’s weighty ballads, which occasionally lack pop early on.

After capping the heart of the set with a well-received Unholy Confessions, Avenged lead the encore with galactic battle cry Planets, a song Shadows says they’ve never played it live. If that’s true, they might want to tattoo this world-scorching epic onto each set list from here on out, as the club quakes in a roiling mosh.

The evening’s most punishing number sets up a pair of night-capping ballads – the Zeppelin-esque Acid Rain and beloved B-side Until The End. In this cosy room, the latter has the intimacy of a dive-bar closer, bidding a strong, uplifting adieu with whiskey-swilling gravitas.

Avenged Sevenfold are back, all right. And if this small, celebratory Minneapolis show was merely a “warm-up,” we all better take cover.

Beast And The Harlot

Hail to the King