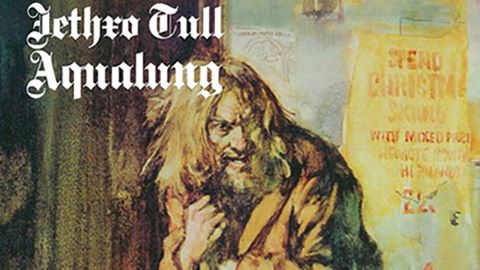 Released in the 45th anniversary year of Tull’s 1971 masterpiece, this set offers very little that isn’t already available on the deluxe reimagining released five years ago.

So, there’s a little part of you that can’t help but wonder if this is a case of the record company trying to repackage
that 2011 Aqualung edition because it’s a guaranteed seller. Nevertheless, it’s churlish to dwell on such misgivings and
we should revel instead in what’s on offer – another reminder of why Aqualung remains such a peerless example of Tull’s early-70s brilliance.

The first CD features Steven Wilson’s stereo remix. And as he points out in the exhaustive accompanying booklet, he has retained the atmosphere and presentation of the original but cleaned up the sound in places to give it that extra sonic boost. There are times when what Wilson has achieved adds to the textures immeasurably, as on My God and Up To Me. His work gives a fresh clarity that helps bring Ian Anderson’s expansive artistic work to the fore.

Aqualung deserves to be celebrated whatever the year.

The second CD contains associated recordings from the same era as the album. These fascinating pieces have also benefited from Wilson’s careful attention, and will give die-hard Tull fans a real frisson of excitement. Also on the disc is the original Life Is A Long Song EP, presented as it was first conceived in 1971.

The third disc is an audio DVD with the album in surround sound, plus sundry other tracks – again given the same 5.1 treatment – as well as also being presented in a new stereo mix format.

Finally, the fourth disc, another DVD, includes the 1974 quad mixes, plus a promotional film from 71 for Life Is A Long Song, with the sound fully remixed. What is missing, though, are a number of Blu-ray items which were part of the 2011 package. But in a way that actually helps, because it puts the emphasis on the quality of the music rather than multiple discs stuffed full of anything and everything that was available from the vaults.

Listening to the album as it’s been adjusted here (and it is an adjustment rather than a full overhaul) makes you realise that Aqualung fully deserves its massive stature. The crowning achievement of these mixes is that they bring to the surface so much more of what the musicians actually recorded, but which was lost due to the studio technology of the era. Now, we can hear a lot more clearly what Tull actually did on Aqualung, and why it deserves to be celebrated, whatever the year.