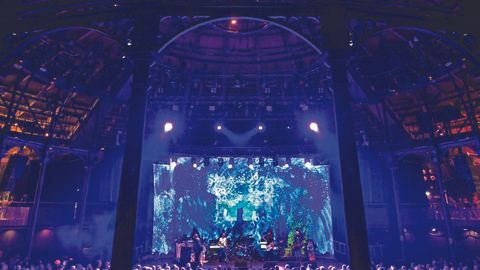 Recorded in May 2017, this gig saw Dave Brock and co play again at the venue where they last played in 1977 (supported by Motörhead) and where five years earlier they had recorded Silver Machine.

A lot of rock has flown through space since then, but despite the loss of erstwhile comrades including Lemmy, Hawkwind sail on – this two-CD and DVD set features new songs as well as old. Ascent, for example, is a gently admonitory acoustic number that threatens to turn into Crowded House’s Weather With You. Meanwhile, Vegan Lunch is a knockabout number that reflects the bumptious, very English good humour exuded by Brock between numbers.

That said, when the analogue synths crank up on Born To Go, a bubbling lab of arcing noise, the ’Wind still come across like honorary Krautrock cousins, their occasional futuristic flights of fancy striking a midpoint between Neu! and Blake’s 7.

Finally, they’re joined by ex-Motörhead guitarist Phil Campbell for an epic blast of Silver Machine, which roars on forever and sends everyone home happy. Their moment has passed but they’re far from running on empty.