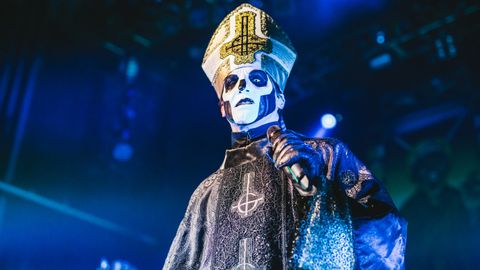 The only clue to the unholy sermon Ghost are about to unleash on the Forum is the Baroque-style chequeredfl ooring on the stage. The Swedes’ equipment is covered with cloths as ZOMBI [6] warm up the audience with their dark and dreamy electronic prog, but the only issue with watching an instrumental act live is that the performance aspect is lacking. Their hypnotic synth riffs would perfectly soundtrack a night spent languishing amid clouds of marijuana smoke, but live, as they remain glued behind drums and keyboards, they don’t make for much to look at. The crowd is as static as the band as each song becomes increasingly indistinguishable from the last and the set begins to sound ever more like a drawn-out Rush middle-eight. When bass/ keys player Steve Moore’s bass appears to malfunction, the set is awkwardly ended with a stiff bow, and the lethargic audience fi les out to the bar, possibly for a Red Bull.

Choral music fi lls the auditorium to signal Ghost’s imminent arrival, and the elaborate stained glass window-themed set is cast into light. The staging is closer to something you’d see at the opera than a metal gig, and is an extension of Ghost’s package. The mix of Hammer Horror, vaudeville and gothic mystery means a GHOST [9] show is as much about the theatrics as it is the music. The capacity crowd is jolted from their Zombi-induced stupor as the opening riff of Square Hammer cuts through the air, and Papa Emeritus III seemingly appears in a puff of smoke thanks to some dry ice and clever lighting tricks.

The Nameless Ghouls are as synchronised in their headbanging and foot-stomping as the chorus in a musical, and Papa is the ringmaster as he strides around the stage, directing them with fl icks of his gloved hand. Starting a set with what’s easily their most accessible track could put them in danger of peaking way too soon, but the energy is kept at electric levels as the band continues into From The Pinnacle To The Pit. Part of Ghost’s appeal has always been their ability to meld traditional gothic sounds with ostentatious riffs that veer from prog to psychedelica to hard rock, and top it all off with a performance that’s earnest but delightfully camp, ensuring they appeal well beyond the niche they could easily be consigned to at fi rst glance. Papa pauses to invite his ‘Sisters Of Sin’ onstage and quips that, when he condemns the nuns to “the pit” (meaning photo pit) the occupants down below should be careful not to put their fi ngers in places they shouldn’t be. Whether it’s intended as Carry On-style humour or a veiled reference to the inappropriate behaviour that happens too often at gigs is open to interpretation, but it draws a chuckle all the same. The nuns are spared being shoved off the stage and exit via the wings.

Dry ice fills the room as Papa powers through the Satanic hymns Con Clavi Con Dio and Per Aspera Ad Inferi, holding his congregation enraptured with the Latin chants. He seems to glide, spirit-like, across the stage, and disappear at moments as cleverly planned lighting casts him into shadow, only for him to reappear on his pulpit between the synths and drums. The creative lighting takes the gig from standard show territory into something worthy of the West End, and if the lighting engineer’s brief was ‘mood and atmospherics’, they’ve fulfi lled it and then some. The stage is plunged into blackness for a few moments after Year Zero, the Nameless Ghouls hanging still as they wait for their leader to reappear. When Papa materialises, he’s morphed from Popestar into Dapper Papa, in a tight-fitting Victorian-style dinner suit and slicked-back hair that shows another reason Ghost are so popular: Papa is sexy. Not very often does a man in robes and skeletal contouring manage to combine that with the pheromone-tickling appeal of a period drama actor, but when the suit goes on and he replaces purposeful strides with hip-thrusts, he manages that rare feat.

Pyro erupts from behind the pulpit as He Is gives way into Absolution, and confetti falls through a rousing rendition of Ritual, making that a hattrick of effects. In keeping with the high energy of the rest of the show, the encore is swift and powerful, with none of the usual pretence of fi nishing the gig or bidding the crowd a fake farewell. The band exit quietly, and the blackout is momentary, before the stage explodes into life once more for Monstrance Clock. This time, Papa and his band take their bows as the solemn chant of the chorus implores the assembled to ‘come together as one’. There’s no doubt that the audience are united in their wonderment tonight: Ghost truly are preaching to the converted.