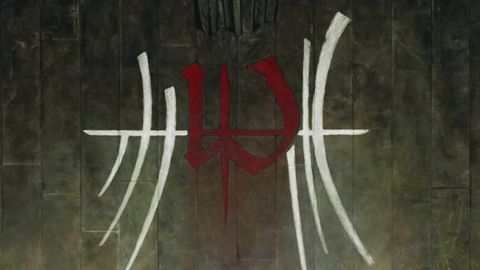 It’s always a good sign when an album opens with the sound of a Viking horn and a neighing horse. Enslaved’s E is their 14th studio album and the first with Håkon Vinje, from Seven Impale, handling keyboards and clean vocals in place of Herbrand Larsen. The album’s monosyllabic title is a reference to the Nordic rune Ehwaz, which literally means horse, but is used to connote cooperation and symbiosis. So now you know.

The music mines the same vein as 2012’s RIITIIR and In Time from 2015, with the notable exception of the unrestrained brutality of Thurisaz Dreaming from that record. The opening track Storm Son is a sweeping metal leviathan with pummelling drums courtesy of the apparently tireless Cato Bekkevold, although even the fastest, most aggressive sections here don’t completely make the leap into the blastbeat territory of the band’s 90s recordings. However heavy the music becomes, there’s still an eye on maintaining a melody within the onslaught.

The River’s Mouth shows off Vinje’s fine voice, which sounds all the more pure and unsullied next to Grutle Kjellson’s belligerent growling. There’s an interest in exploring dynamics too, with the band dropping out to leave just a single guitar keeping the riff going for a moment before they come bludgeoning back in. There’s always a temptation for bands this heavy to never take their foot off the accelerator, so even if it’s not exactly nuanced, at least the drop-down gives the listener a moment’s breathing room.

Sacred Horse gallops faster than Odin’s eight-legged steed Sleipnir and features an awesome keyboard solo from Vinje, clearly having a blast channelling the spirit of Jon Lord. The song’s long coda features pulsing drums accompanied by the sort of singing designed to inspire large, bearded men to pull harder on the oars of their longboat.

The guitar interplay between Ivar Bjørnson and Arve Isdal is a highlight of Axis Of The Worlds, and Feathers Of Eolh boasts odd time signatures aplenty. Hiindsiight sees the band expanding their sonic palette with the aid of some special guests. The track begins with a post-metal, shoegaze feel thanks to a hypnotic, droning riff, then moves into sludgy doom territory, before alternating between solos led by saxophonist Kjetil Møster and Einar Kvitrafn Selvik from Wardruna, who sounds like he’s playing a Norwegian lyre called a Talharpa.

It’s impressive to hear how far Enslaved have travelled from their black metal origins and, based on the scope of their vision here, it’ll be fascinating to see where they go next.