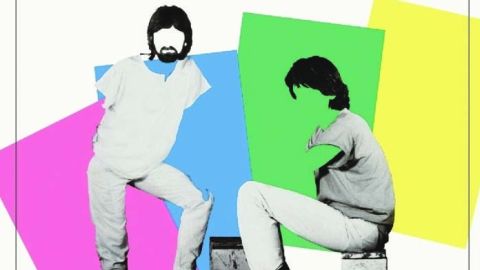 Sometimes artists change direction because that’s where the muse leads them and sometimes because circumstances demand it. Phillips is refreshingly candid about the circumstances leading up the recording of his eighth album released in 1983. The two-disc set, featuring the original album and extra demos and outtakes, captures him at something of a crossroads in his personal life. As Jonathan Dann’s excellent and detailed liner notes make clear, Phillips urgently needed to reach out to a wider audience; in other words, make some money.

Collaborating with Richard Scott in 1982, quixotic encounters with the Roland 808 drum machine spawned several chart-orientated tunes in short order. The sonic landscape here is quintessentially 80s pop: stiletto-thin synths, bright guitars, bursts of synthetic handclaps, brash sax and hook-pandering titles like Golden Bodies and Love In A Hot Air Balloon. Though Going For Broke’s formulaic approach, full of synthi-bombast, rolling timpani and those self-motivational lyrics that urge individuals to throw caution to the wind when there’s nothing to lose, in the dying moments, where it jumps out of its sequencer-driven groove it provides a startling glimpse, complete with a blistering guitar solo, of what a post-Gabriel Genesis might have sounded like had Ant returned to the fold. Throughout, the album is upholstered with luscious chords pressed into the service of toe-tappers rather than Phillips’ more usual pastoral ruminations.

It might be a far cry from the acoustic alchemy and intimate warmth of Phillips’ classics such as The Geese And The Ghost, but that was the object of the exercise and as such it’s an entertaining diversion. Phillips’ own assessment was that Invisible Men was a misstep but while many of the songs eschew the more thoughtful, intimate side of Phillips’ catalogue, many contain a degree of craft that’s not only admirable but surprisingly catchy.