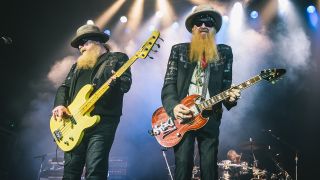 ZZ Top have announced plans to tour across the UK and Europe next summer.

Billy Gibbons, Dusty Hill and Frank Beard have only announced three shows so far, with further dates to be revealed in due course.

ZZ Top will play at Prague Rocks on June 19, at the Barcelona Rock Fest on July 5, and London’s SSE Arena Wembley on July 12, with tickets going on sale on November 16 at 10am GMT.

Jimmy Barnes will support in London.

The trio have lined up the tour to mark their 50th anniversary and will begin in early June in Scandinavian countries, with dates and venues to be announced soon.

Billy Gibbons says: “It’s been 50 years, and I think we’re starting to get pretty good! We’re just as excited to play Barcelona this summer as we were to play Beaumont, Texas, back in 1969.

“The beard are, perhaps, a bit longer, but nothing much else has changed and we hope to keep it that way.”

It’s expected that ZZ Top will play in a dozen countries over a four-week period.