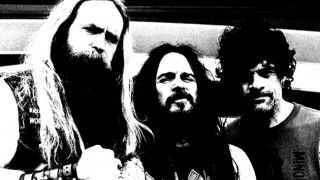 In May last year, Zakk Sabbath revealed they would pay tribute to Black Sabbath’s self-titled debut album by re-recording it as faithfully as possible to mark the record’s 50th anniversary.

It’s now been announced that vocalist and guitarist Zakk Wylde, bassist Blasko and drummer Joey Castillo have recorded the tracks for an album they’ve titled Vertigo – named after Vertigo Records who issued the original back in 1970.

It’ll be released on September 4 through Magnetic Eye Records with Blasko explaining: “We recorded a live EP and were wondering what we could do next as a cover band – so the 50th album anniversary came just at the right time.

“Compared to Paranoid, which is almost like a best-of record, the bulk of the material on Black Sabbath is deep-cut, really experimental stuff that was never thoroughly explored, so that was a challenge, not to forget that we wanted to meet our own high standards.”

To mark the news, Zakk Sabbath have released a stream of the opening track, Black Sabbath and revealed Vertigo won’t be available on digital or streaming platforms.

Blasko says it’s to “make the release feel authentic to the time when vinyl ruled the earth,” and adds: “It was such a cool time for those of us that grew up during that time.

“The fan experience with the physical product is irreplaceable with digital and streaming. We wanted to capture that authenticity.”

Vertigo will be released as a Digipak CD, on CD/DVD which will include a hardcover book with interviews and making-of footage, and on limited edition yellow vinyl. It’s available to pre-order now.