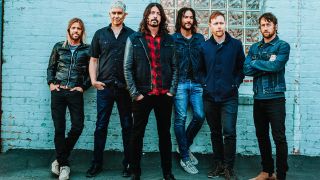 A young Foo Fighters fan stole the show in Belfast last night after the band invited him on to the stage during All My Life.

Five-year-old Taylor then proceeded to dance throughout the 2002 track, with Dave Grohl and co later retweeting the fan-filmed clip on their social media accounts.

Taylor’s mum Nikki tells Belfast Live: “We are insanely proud of our wee man. We're still in shock. My phone has been going mad with friends and family contacting us after seeing it.

"He's actually named after drummer Taylor Hawkins so we had to take him to the Foos for his first gig.”

Meanwhile, Hawkins says that a new Foos album, which would be their first since 2017’s Concrete And Gold, could see the light of day in 2020.

He tells RockSound: “Well, from what I've heard from our fearless leader Dave Grohl, he has a lot of demos that he's worked on and I think we'll start, once this tour is over. I think not too soon after that we'll start the process of putting the songs together as a band.

"It's a long process, we do a lot of demoing and stuff, but I think that we'll have, I'm hoping, I think we'll have a new record by next year. We should.”

Foo Fighters will headline this weekend’s Reading and Leeds festivals.

The amazing moment the @foofighters invite 5 year old Belfast fan Taylor up on stage, his first ever concert, and he absolutely killed it!!!! 🎶🙌🙌🙌👇 @BelfastVital #CoolSaturdayShow pic.twitter.com/qPeW2pco4sAugust 19, 2019