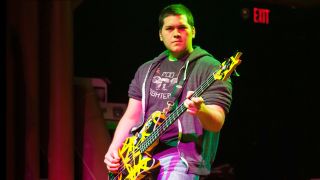 Eddie Van Halen has revealed his son and bandmate Wolfgang is working on a solo album.

And the guitar icon says the material he’s heard so far is strong enough not to need his support.

Eddie tells What It Means To Be An American: “Wait till you hear his record. This isn’t Pop talking – this is real talk. It blew my mind.”

No completion or release date has been confirmed, but Eddie adds: “They just started. Probably the end of the year.”

Wolfgang, who appeared on Van Halen’s 2012 album_ A Different Kind Of Truth_, has also worked with Alter Bridge guitarist Mark Tremonti’s solo band. Tremonti last year said: “He’s such a quick learner – he gets everything in two seconds.”

The chances of a new Van Halen album remain in doubt, with Eddie saying he hasn’t been in contact with frontman David Lee Roth recently.