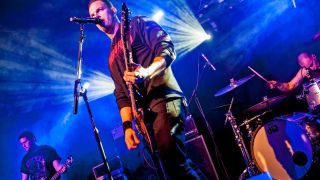 Guitarist Eric Friedman handled bass duties on the Creed and Alter Bridge man’s 2012 title All I Was before Van Halen became part of the live lineup. And the band leader believes things have moved up a notch after the bassist struck up a strong partnership with drummer Garrett Whitlock.

Tremonti says: “He’s such a quick learner – he gets everything in two seconds. He came in a few days late for our last writing session and we were kidding with him that the new songs were tough and he’d have to catch up. But he learned them in two seconds.

Van Halen was introduced to Alter Bridge by Sevendust drummer Morgan Rose and soon became a fan. But he and Tremonti first met when Wolfgang was around eight years old. Tremonti says: “Alter Bridge and Van Halen played together years ago and I remember seeing Wolfgang when he was a little kid. All these years later we’re in a band together, and it’s been really good.”

The band are working on 20 songs for their album, with 12 to be selected for the record and the remaining eight to be drip-fed one month apart. “The music business has changed so much,” the mainman reflects. “You notice when you put out an album that four or five songs get a lot of attention and the others just kind of get looked over.

“We released two B-sides from the last album, and because they were isolated they got a lot of attention. So we want to do that again – make sure those eight extra songs are isolated by themselves and get their fair share of attention.”

“We’ll let people digest the record for three or four months before we put out the other eight songs. I’m still working on some of the lyrics and I have around nine guitar solos to work out, but I start tracking my parts after Halloween.”

He’ll record his studio tracks in November, and plans to release the work in March next year, in time for the Europan festival season. “We definitely plan on touring as much as we can,” he says. “I hope to get over to Europe a few times next year.”

The All I Was tour, which demonstrated his love of heavier music than the Alter Bridge and Creed material fans have become used to, gave him his first experience of fronting a band on stage. He says: “I was kind of nervous; but once the lights are down and you’re doing your thing it’s okay.

“The biggest challenge is between songs, being witty and talking. that’s the tough part.”