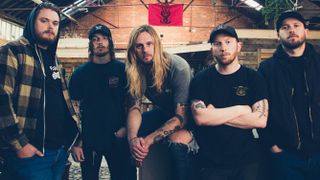 While She Sleeps have released a lyric video for their new track Feel.

It features on the band’s upcoming album You Are We, which will launch on April 21.

Speaking exclusively in this month’s Metal Hammer, vocalist Loz Taylor says of the record: “You wanna keep people happy, but you wanna record the music you wanna record.

“Plus, the other guys doing more singing lets me control my heavy vocals better and mix it up a bit. At the end of the day, if you worry too much, it’s only gonna hinder you, so we decided to sit back, enjoy what we were writing, and that’s the sound of You Are We.”

You Are We is available for pre-order, while the band are currently on the road in support of the follow-up to 2015’s Brainwashed.

The full interview with While She Sleeps can be found in the brand new issue of Metal Hammer magazine, which is on sale now. Iron Maiden are the cover stars, while Royal Thunder, Motionless In White, Ghost Bath and Life Of Agony also feature.

While She Sleeps You Are We tracklist

While She Sleeps UK and Ireland tour dates

How While She Sleeps have taken control of their own destiny