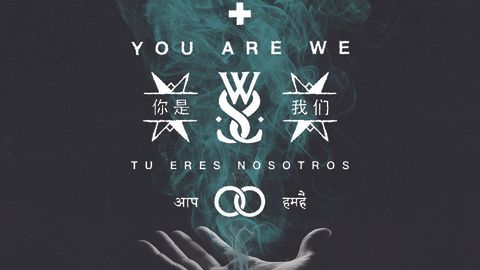 Much has been made of metal’s recent inability to provide contemporary bands that appear capable of tackling the mainstream without softening their sound to the point that it has all but alienated the fans that put them on the map in the first place. Whether it’s Bullet For My Valentine’s disastrous Temper Temper or infamously misfiring Trivium album The Crusade, looking for wider acceptance is rarely warmly received on our side of the fence. So what of While She Sleeps – a band that showed promise on EP The North Stands For Nothing, became tipped for greatness with the excellent This Is The Six and then must have been left puzzled after following it with the arguably superior Brainwashed, but having it bizarrely overlooked by the majority of people? The next move in their career is crucial to their own development; do they stick to what they know and risk more apathy or do they head down a new avenue? Either way, the stakes couldn’t be higher.

The opening title track should smash any fears that WSS are going down the overly polished, radio rock road. Like their best work, it features a maelstrom of riffs that twist and turn at full speed, a throat-ripping vocal from Loz Taylor and a production job that is gruff, raw and dirty. It’s the epitome of their punk rock roots. What is noticeable, though, is the growing presence of guitarist Mat Welsh’s more melodic vocal hooks. And even though the song features the sort of chorus you’ll be singing along with by the second time you hear it, when surrounded by the intensity that WSS have made a career from, it never feels like a cynical move.

In fact, as You Are We progresses, this extra string to their bow becomes a more than welcome addition. The partially rapped pre-chorus of Steal The Sun complements the huge, Tom Morello-style groove brilliantly, the ‘Whoah-oh’ bellow above the classic thrash riff that drives Feel, the acoustic croon that bursts into a meaty half-time, punk banger on Wide Awake. It’s all great, and, while it may lack the continually pure, white hot intensity that made Brainwashed such a savage beast, it perfectly manages that balancing act of experimentation and growth without sacrificing the band’s credibility or legacy. When Bring Me The Horizon’s Oli Sykes turns up on the anthemic Silence Speaks you get the feeling that While She Sleeps might be back on the same path as their fellow former Sheffield scene buddies to mass acceptance.

As good as all this is, the best moment on You Are We is the five-minute, gang-chanted, build and burst of Settle Down Society. It sounds like a hardcore band mixing Sempiternal and Rust In Peace – truly the best of both worlds. That it’s closely followed by a song like Civil Isolation, which ignores anything even remotely poppy or hook-laden for a good two minutes in favour of a hernia-inducing metallic intensity, and could go toe-to-toe with anything from This Is The Six, shows which way this band prefer their own personal sonic pendulum to swing. For all this talk of While She Sleeps’ commercial potential and embracing of melody, they still haven’t forgotten who they are, where they came from or the people that put them here. It looks like this scene might finally have a band to believe in.