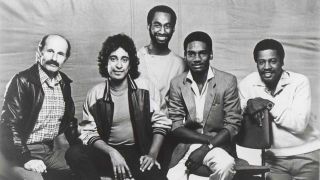 Jazz fusion legends Weather Report will have a Live In London set released on CD for the very first time, on the Angel Air/Store For Music label on July 3.

The press information that Prog received simply states: "The exact details around the gig seem to be lost in the mist of time, though it was at some point in the 80s!" Weather Report only payed four London dates in the 80s - at Hammersmith Odeon on November 14, 1980, when Jaco Pastorius was still in the band, two more Hammersmith Odeon shows in June 1983 and one final time at the Dominion in 1984.

The Live In London CD features a line-up of Joe Zawinul (keyboards), Wayne Shorter (sax), Omar Hakim (drums), Victor Bailey (bass) and Jose Rossy (percussion) places this between 1982 and 1984, so that narrows things down to the final three shows.

The set comes from a radio broadcast, and looking at the band's setlists over at the time, it seems that the Dominion show is the most likely. But we're sure fans out there will let us know.