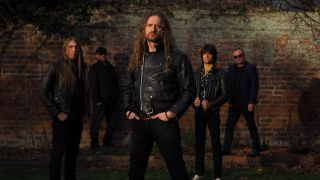 Wayward Sons, the UK rock band fronted by former Little Angels singer Toby Jepson, have released a video for Alive. The track is taken from the band’s upcoming debut album Ghosts Of Yet To Come, which will be released on September 15, and follows the release of the first single from the album, Until The End.

The video for Alive features the band facing down a group of rogue money-grabbing zombies armed only with their guitars, and brings to life a song that’s clearly not your average run-of-the-mill tribute to fast cars and life on the road.

“This song is a question as well as a statement,” days Jepson. “It challenges the idea that life is a prelude to a supposed better existence after death. I grew up amongst evangelists but knew almost immediately that I could never believe in something that proffered the idea that we are all sinners in life and get absolution, salvation or redemption in ‘paradise’ once we are gone.

“This idea, as we know, exists in most religions around the world in one form or another. To me, It amounts to nothing more than a ‘death cult’ ideology. Its avoidance and resistance is something that has fundamentally shaped me. I personally prefer the ethos that we have one life and as such should live it well, in the belief that a life well lived with hope, peace and love is a far better option…sadly, not everyone thinks this way.

“It’s the heaviest piece of music we created for the album, and emerged in the early days of the writing process. It’s Nic’s riff, and what a doozy it is! and for all of us we felt it reflected the mood of the discussion. For us, the whole album continues this search for answers.”

The album was recorded at Vale Studios in Worcestershire. “I feel I have unfinished business,” says Jepson. “Stories still left to tell, points to make, noise to create, all of the above… besides, it wasn’t a choice, more of a need. My intention is very simple. I want to write about what makes me tick; about what I believe in. Hopefully you will believe in it too. It will be warts and all.”

Ghosts Of Yet To Come is available to pre-order now.

The band have a Bristol headline show and three festival dates lined up for later this month.

More dates will be announced soon.

The Rock Frontmen Quiz: how well do you know your lead singers?