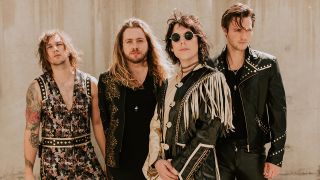 The Struts have released a video for their new single Tatler Magazine.

It’s the latest track taken from their latest album Young & Dangerous, which launched in October last year through Polydor.

The video cuts between The Struts performing the song and shots of frontman Luke Spiller in the lap of luxury in a Napa Valley vineyard, with the song, based on the high society publication, described as “an anthemic ode to the finer things in life.”

Spiller explains: “I remember coming home from the pub I was staying at with my parents for a few days. I stumbled into the lounge where my mum was watching a documentary on Tatler Magazine.

“After watching a few episodes, I was immediately inspired and went to my piano where I started to bash out the bare bones of the song’s chorus and feel. After a few hours, I decided to put it to one side thinking it was too ‘musical theatre’ for the band.

“However, after a sudden creative drought in Los Angeles where we were writing, I decided to suggest working on something fun, free and without any real musical boundaries.

“I told bassist Jed Elliott about the idea and he showed real enthusiasm towards the song. Quickly we got to work and finished it in about 45 minutes. Lyrically this song has some absolute gems but dare I say, ‘I'll fly privately bon voyage economy’, is one of my best to date!”

The Struts have released the video to coincide with the start of their UK and European tour, which will get under way in Manchester on Friday night.

The Struts: Young & Dangerous
The Struts' follow-up to 2014's Everybody Wants features the singles Bulletproof Baby, Body Talks, Primadonna Like Me, In Love With A Camera and Tatler Magazine.View Deal