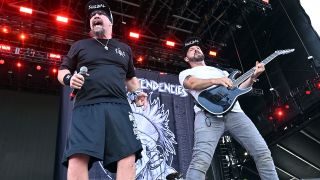 Back in 2017, Tye Trujillo – the 12-year-old son of Metallica’s Robert Trujillo – hit the headlines when he stood in for Reginald ‘Fieldy’ Arviz during Korn’s South American tour.

Now, 15, Tye has emerged again – this time playing bass with his dad’s old band Suicidal Tendencies during their recent performance in Southern California – and the group have released a video of the performance.

“That first show, Robert came out like a beast, going wild while slapping and bashing his bass with precision and a purpose. After the show, they were all like, ‘Where did you find this guy?’

“An amazing bass player, incredible person, and of course also co-founder of Infectious Grooves, that was the start of a lot of great shows, moments, memories and helping take Suicidal Tendencies to another level!

“Flash forward to last Saturday night in San Pedro at the SoCal Hoedown – history repeats itself as a young Trujillo steps on stage and bashed around it like a true Cyco!”

The band add: “Huge thanks to Tye Trujillo for filling in for Ra Diaz for this one show. For showing what a badass he already is on bass, and at just 15 years old, has already accomplished a lot, but huge things are still coming his way. His youthful enthusiasm was contagious, his bass skills undeniable.

“Just like Robert and Chloe, we were all super proud of him and an absolute blast to be able to share a stage with him.”

The start of the video shows Trujillo being knocked to the ground accidentally by frontman Mike Muir, with the band adding: “We warned him, over and over, ‘Watch out for guitarist Ben Weinman!’ So first song You Can't Bring Me Down, and guess what... it's Cyco that knocks him over!

“Well as we always say, you get knocked down in life, you get back up – and not only did Tye get back up, but with a smile and didn't miss a beat or a step! There's a lesson there... be like Tye!”

Suicidal Tendencies’ next show will take place at San Diego’s Waterfront on November 24.