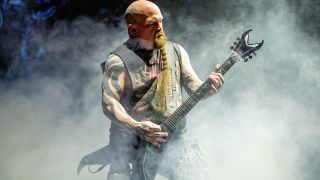 Slayer are on the home straight of their final tour, with the thrash icons set to bring the curtain down at the end of this month with two shows at The Forum in Los Angeles.

But even after a legendary career, things can sometimes go awry, with guitarist Kerry King proving he is indeed human when Slayer played at New York’s Madison Square Garden recently.

King couldn’t quite get his finger across the fretboard during the intro to Repentless track When The Stillness Comes - throwing his hands up in despair when he flunked it four times.

However, he made amends by launching into the track’s riff – delighting fans, some of whom had shouted, “You can do it!”

Fan-filmed footage has appeared online and can be watched below, with the fretboard fankle happening around the 15-minute mark.

Earlier this month, Slayer’s manager Rick Sales reported that although the band’s live shows are about to wrap ups for good, that didn’t “mean the end of the band.”

Slayer also recently released their concert film and short movie compilation The Repentless Killogy after it premiered in cinemas around the world at the start of November.

Slayer: The Repentless Killogy
As Slayer prepare to bring the curtain down on their legendary career, they bow out with this new release. Combing live footage with a short film, this is not to be missed.View Deal

Slayer: The Repentless Killogy Live
Along with the DVD and Blu-ray release, Slayer have also brought out the live show on CD and vinyl. It features 21 tracks including Angel Of Death, South Of Heaven and Hell Awaits. View Deal