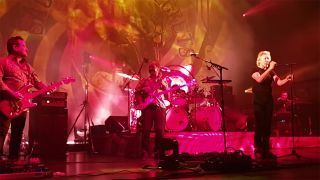 Roger Waters guested with old Pink Floyd pal Nick Mason and his Saucerful Of Secrets band last night at New York's Beacon Theater. He sang vocals and tackled the famous gong on Set The Controls To The Heart Of The Sun, originally from Pink Floyd's second album, 1968's A Saucerful Of Secrets. Footage has now surfaced from the night on You Tube and you can watch the performance below. It's the first time the pair have performed together on stage since Mason appeared at several of Waters' 2011 The Wall concerts.

Rolling Stone magazine reports that Waters reminisced about Pink Floyd's first ever US show, stating, "It was called the Scene Club and its owner was Steve Paul, and it was 1969, I remember it well. We had a gong in those days. As I remember, as I used to, in the middle of the show, hurl a necked whiskey glass at it – and the glass was empty because I’d drunk the whiskey, as we did back in the old days – anyway, I’m so happy to be here playing with Nick.

“We’re very, very close and old friends. And when I was doing The Wall he came and sang Outside The Wall a couple of times, so here we are.” He turned his head around to the drummer. “Loving the show, by the way, Nick. My considered opinion is that you sounded a lot better than we did back in the day.”

Pink Floyd website Brain Damage reports that Waters "hugged every member of the band, and appeared again on stage for the final bow after Point Me At The Sky. A fantastic treat for all in attendance!"

Some of Mason's band mates took to social media in the wake of the performance, with guitarist Lee Harris stating on his Facebook page; "When I was 7 my Mum and Dad took me to see them playing The Wall at Earls Court. It had a profound effect on me. My whole life has been spent trying to recapture how I felt that evening. For 12 minutes last night I came very close."

Meanwhile singer and guitarist Gary Kemp took to Twitter to state "Last night in New York was pretty amazing. Roger Waters joined us for Set the Controls. Amazing reaction." and posted a picture of himself with Waters.

Saucerful Of Secrets are at the tail end of their North American tour. The band play New York again this evening, and the final date is on Monday at the Washington Dar Constitution Hall.

The band return to the UK for a string of live dates at the end of this month and the beginning of May , including two nights at London's Roundhouse.