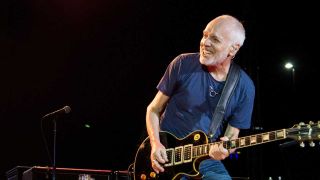 The Peter Frampton Band have released a live video of Me And My Guitar ahead of the UK dates on Frampton's farewell tour.

“This is a real straight ahead Blues, as far as I’m concerned," Frampton tells Classic Rock. "It just comes out of the gate screamin’! We had a lot of fun doing this one.”

Me And My Guitar was originally released on last year's All Blues album, where Frampton was joined by bandmates Adam Lester, Rob Arthur and Dan Wojciechowski. The album also featured guest appearances from Sonny Landreth, Steve Morse, Kim Wilson and Larry Carlton.

"With this recording, we pay tribute to all the original artists who invented this incredible music," said Frampton. "I hope you can hear and feel our enjoyment!"

Last March, Frampton revealed he would be playing his last shows after being diagnosed with the degenerative muscle disease Inclusion-Body Myositis, telling Rolling Stone: "In a year’s time, I might not be able to play. Right now, it’s progressing but I’m still at the top of my game.