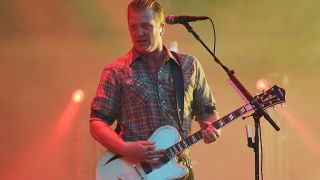 Over the weekend, nine-year-old drumming sensation Nandi Bushell uploaded a clip to Instagram showing her playing along to Queens Of The Stone Age classic No One Knows.

The clip of Nandi battering her kit has since gone viral, racking up an impressive 177,000 views in just three days – with the video even shared by Queens Of The Stone Age themselves, who called Nandi’s cover “incredible.”

Foo Fighters' leader Dave Grohl famously played drums on the original 2002 song, but he has yet to comment. No doubt his jaw is still on the floor in awe having watched Nandi's amazing performance!

And as if that wasn’t enough, Nandi also took to the stage at London’s Shepherd’s Bush Empire at the weekend as part of The David Bowie Alumni Tour, where she performed several tracks.

A message on the tour’s Instagram account said: “London was amazing and having Nandi Bushell with us on drums last night was very special. She’s the real deal."

Check out the clips below.