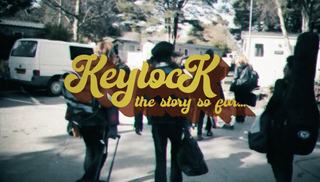 Still only 20, guitarist Aaron Keylock has an acclaimed solo album and a load of acclaim under his belt. But Keylock felt restricted as a solo act and spent the last couple of years assembling a band to realise his dream of creating new music influenced by classic rock'n'roll bands like The Band, Free, Aerosmith and The Black Crowes.

Watch their story so far in the five minute documentary below, recorded this month in lockdown.

A meeting with Liverpool-based singer Jonnie Hodson was the start of Keylock. "After releasing a solo record and playing on various tours/festival slots, I was feeling trapped as an artist," says Aaron. "I started searching the country for musicians who spoke the same musical language. I had met Jonnie Hodson at an after party. We talked all night about Paul Rodgers, Muddy Waters, Otis Redding and Joe Cocker."

Jonnie Hodson: "When Aaron got in touch, for me it was a no brainer for us to have a jam. When he came up to Liverpool the musical conversation between us was instant and writing together was very natural. We locked ourselves away in a cheap hotel room, Mick and Keef style and had five or six tunes on the first day.”

They spent all of 2018 writing songs, and completing the line-up. "It sounds so natural," says Keylock. "We now have Conor Cotterill on bass referencing Parliament/ Funkadelic, Free and Sly and the Family Stone. Thom Carter on keys, bringing the feel of the Grateful Dead, Bob Dylan and Crosby, Stills, Nash and Young. Joe Major on drums, coming from a world of Led Zeppelin, Deep Purple and The Who. What I’ve always loved about rock n roll is the freedom that it represents and that is what this band stands for."

Watch the video below for an introduction to the world of Keylock.