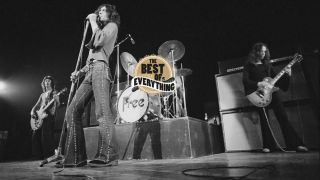 The first time I ever recall hearing Free was when I heard ‘All Right Now’ on the radio. It was the summer of 1970, and it came on and I thought to myself, ‘God, what is this?’. I’d never really heard anybody sing like that before, and despite only being 10 years old, there was something about it that pulled me in.I have no idea why – it was just one of those records.

I think the next song I heard was Wishing Well as a young teenager, and I thought, ‘This merits further investigation.’ So I bought The Free Story [1974 compilation album], which was the double gatefold vinyl with the enigmatic black cover of the spotlight on the microphone, and by that stage I’d become a total Free obsessive – particularly with Paul Kossoff’s guitar playing.

Throughout my formative music years, they were there all the time, and they’re still very important to me. The reason I never tire of their records is because they have an incredible musical economy, which is very unusual in rock ‘n’ roll. Their ability to leave massive gaps – whether it’s in the guitar part, drums or the bass – almost makes it feel as if you can walk into the songs and wander around, and that’s so difficult to do. Most rock bands want to play loud all the time, and to achieve that kind of economy and space is amazing. They’re an exceptional group of musicians, and they were so young when they wrote all those songs; that’s what’s so mind blowing about it all.

Last year I was fortunate enough to play with Simon Kirke, which was brilliant because he’s one of my favourite drummers. We played a bunch of Free songs, and I can’t tell you how great it was to play All Right Now with the actual drummer who played on the record. So that song would have to be number one…

ALL NIGHT NOW (Fire and Water, 1970)
This was first song that I heard by Free and it’s an amazing, timeless piece of rock‘n’roll; it’s got a definitive riff and an incredible vocal performance, and a bass line that everyone can sing. Everybody mimes all the drum fills, too. Every part of this record is perfect.

I’M A MOVER (Tons of Sobs, 1969)
The next song would have to be I’m a Mover, for the reason that when Danny [Bowes, Thunder singer] and I started our first band at school we used to cover it. It’s very easy to work out but very difficult to play well, and we played it for many years so it would have to be number two.

COME TOGETHER IN THE MORNING (Heartbreaker, 1973)
This is a beautiful, heart-rending ballad. It was written about [Paul] Kossoff when he wasn’t very well. Simon [Kirke] told me that. It has a kind of church-like atmosphere about it that’s very tall and very deep and very wide. Like a lot of Free songs it’s very cinematic, and you can almost walk into it and step around.

MY BROTHER JAKE (Highway, 1970)
This is another song that I think [Paul] Rodgers wrote about Kossoff when he wasn’t very well. It’s a very unusual song, once you get inside the bones of it and work out how it’s all put together. There are three pianos on it, which is very odd in its own right, and it’s an out-and-out pop song, which was quite unusual for Free because they were a blues band for the most part. It reminds me of a Paul McCartney song in a way.

SOON I WILL BE GONE (Highway, 1970)
This is another one of my favourites. It has a very depressing, dark undertone and it wanders around these kind of strange minor chords. It’s a very meditative song, and once again incredibly atmospheric and cinematic.

THE HUNTER (Free Live!, 1971)
I’d have to say The Hunter next, but the live version from Free Live!. That’s one of those songs where you feel like you’re right there in the room when you listen to it, and you can feel the audience and their reaction to it. It’s a massively exciting piece of rock ‘n’ roll. Great singing, fantastic guitar playing, and just a brilliant song.

GET WHERE I BELONG (Free Live!, 1971)
This is another massive favourite of mine. Not a lot of people know it, but it was almost like a country song, and it just shows the depth and variety in their song writing. It’s a very joyful too, which was unusual because a lot of their stuff is quite dark, and it’s got a beautifully uplifting melody.

OH I WEPT (Fire and Water, 1970)
If I were pushed to choose, probably my favourite Free song ever would be Oh I Wept from Fire and Water. I keep using the same words, but the best way I can describe this song is atmospheric and economic: there’s so little going on, but every little nuance and note is beautifully exploited. Free also had a great thing with tempos, and none of their songs were ever very quick. Everything was always in this slow tempo, and it’s very difficult to play in that kind of style with such deftness and lightness of touch.

FIRE AND WATER (Fire and Water, 1970)
I mentioned Fire and Water there so I’m going to have to say the title track. I love that whole album, but this song in particular has a very powerful riff, and there’s a great brooding darkness to it. That’s the kind of common thread that runs through all Free’s stuff. It tips the hat to their blues influences as well, and the guitar playing is just brilliant.

MR BIG (Free Live!, 1971)
Once again, it has to be the live version from Free Live!. It’s another one we used to do when we were kids, and it’s one of the only songs I can think of that’s got a bass solo that’s actually really good. It’s about three or four minutes long as well, and it’s just a fantastic piece of music. It’s very unusual as well. All the instruments are kind of in opposition to each other, but yet when you put it all together it grooves really well in this weird, jerky, rhythmic kind of way. It’s got a kind of throbbing quality about it, and the live version’s got a brilliant vocal performance from Paul Rodgers.

THE STEALER (Highway, 1970)
The last song has got to be The Stealer. We covered this song recently when we were recording extra tracks for our most recent album Wonder Days [2015], and we went into the studio and played a load of our favourite covers, once of which was The Stealer. It’s one of those songs where as soon as you hear the first second of riff, you know what it is. It’s got this really unusual groove that’s distinctively Free, and the bass line contradicts all the rules but it just works brilliantly. This song kind of perfectly sums them up actually: that smouldering bluesy vocal, a very odd bass line, peculiar drumming, and fantastic guitar playing. Free are a completely unique band and there’s never been anyone else quite like them – before or since.

Listen to the songs on our Spotify playlist: The 11 best songs by Free according to Thunder’s Luke Morley.

They've been written off, broken up, reunited. Now Thunder want even more…