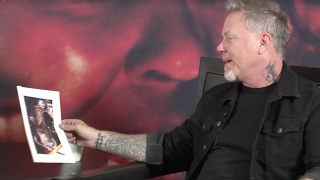 a still from the video

A video of James Hetfield reacting to a variety of celebrities wearing Metallica t-shirts has been shared.

The singer is shown a range of stars such as Kim Kardashian, Avril Lavigne and Ryan Gosling wearing merchandise from different album eras.

When shown a picture of reality star Kardashian wearing the rare Metal Up Your Ass 1982 tour design rumoured to have cost her $2000, Hetfield jokingly refers to her as “Kanye West in drag.”

He adds: “It’s a little large, as there’s more skin showing than I’d let my daughter do. If she was around before Kill ‘Em All and bought that shirt, I’d be pretty impressed.”

Last year, Hetfield said Justin Bieber being photographed wearing a Metallica t-shirt was one of his top 10 highlights of 2015.

This week, Hetfield also revealed in an exclusive interview with Metal Hammer that he enjoys the ‘Hetfield memes’ online.

Metallica have issued a live video of them performing Harvester Of Sorrow at their show in Quito, Ecuador. The clip follows their live footage of Battery and Ride The Lightning from their appearance in San Juan, Puerto Rico.

Metallica will celebrate the launch of their forthcoming record Hardwired… To Self Destruct with an intimate show in London’s House Of Vans on November 18.

Metallica frontman sees funny side of 'the Hetfield memes'