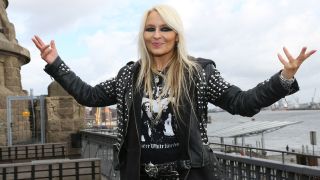 The singer, who fronted German band Warlock in the 80s, was the first woman to front a band on the Monsters Of Rock Tour in 1986.

Doro tells Zombie Tapdance Magazine: “There were 500 people backstage at Monsters Of Rock and I was the only girl. It was a little bit lonely sometimes.

“But other than that, I never had any problems. I always had a great time. I was always treated really well.”

She continues: “There were some other cool women doing it. Rock Goddess from England – I loved the singer – Jody Turner, you had Girlschool, Lee Aaron in Canada. There were a handful.

“But I just did what I love. I never really thought it was such a big deal. Yes I’m a woman – but I’m a metalhead. I think music is above it all.”

Watch the full interview below.

Doro previously told TeamRock that she faced “pressure” and “a lot of attention from the media” as a female singer.

Earlier this year, Doro released a clip of herself performing Love Me In Black live, followed by a video for her single Love’s Gone To Hell.

She’ll head out on her European tour later this month.