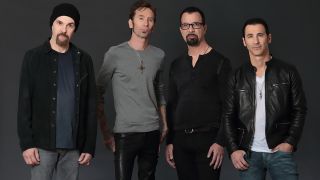 Godsmack have released a video for their When Legends Rise track Unforgettable.

The shoot was directed by Noah Berlow and shows frontman Sully Erna, guitarist Tony Rombola, bassist Robbie Merrill and drummer Shannon Larkin team up with more than 400 aspiring young musicians from across New England, which culminates in an epic performance at the SNHU Arena in Manchester, New Hampshire.

The whole process took two years, with Godsmack leading the project to help educate young people about the importance of music.

Erna says: “We took these middle school students on a two-year long journey to show them how important music truly is to us all.

“Throughout 2018, we continued to include these kids in all aspects of the process by showing up at their school and personally teaching them the song, including them joining part of our world tour and inviting them to perform live onstage with us.

“We took them to New York City to further educate them on the business side of the music industry, visiting them at their schools to talk to them about the gift of music, and ultimately inviting them to shoot their first ‘official music video’ with the band.”

Last year, Erna made his debut as a corner coach for boxer David Tubbs in his bout against Ranieri Souza. The Scars For Scars event was organised to raise money for The Scars Foundation – the charity Erna set up in April 2019 to raise awareness around mental health.