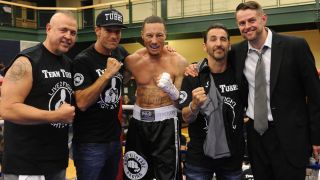 Earlier this month, it was reported that Godsmack frontman Sully Erna would be a corner coach for boxer David Tubbs in his professional debut against Ranieri Souza.

The Scars For Scars bout was organised to raise money for The Scars Foundation – the charity Erna set up in April to raise awareness around mental health.

Boxing enthusiast Erna was in the corner alongside trainer Joseph 'Hoss' Janik – and the pair didn’t have long to wait for Tubbs to land the knockout blow, with the two-times National PAL Amateur Champion taking just 18 seconds to down his opponent.

After the fight, Erna said: “It was definitely a little faster than we expected. He did exactly what was asked of him though. He threw the exact combination that Hoss was working on in the locker room with him on the pads.

“One of the punches landed clean on the side of the head and in boxing that's all it takes. Tubbs is obviously an exciting fighter and we all think he has a bright future.”

As for the experience, Erna added: “It was an honour to be invited to work with Team Tubbs on such a special night. A professional debut is such an important night for a fighter and to do it at an event benefiting The Scars Foundation made it even better.

“I’m looking forward to being a part of Tubbs' next fight and continuing to work in the boxing world.”

Erna will rejoin his Godsmack bandmates next month for their North American tour with Halestorm and Monster Truck in support of their 2018 album When Legends Rise.