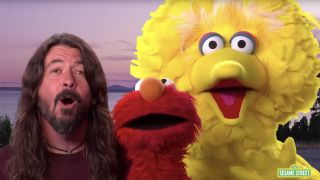 In September last year, it was revealed that Foo Fighters vocalist and guitarist Dave Grohl would appear on Sesame Street to mark the show’s 50th anniversary.

The new season will kick off this coming Saturday (November 16) and to mark the news, Sesame Street have released a video showing the Nicest Guy In Rock play the Here We Go Song with Big Bird and Elmo.

Dave Grohl says: “It’s nice to come here and be with my friends Big Bird and Elmo. I was just thinking, ‘There are friends everywhere – even ones you don’t know.’

“There are lots of people across America we could be friends with, we just haven’t met them yet.”

Check out the video for the catchy song below.

The news of Grohl’s involvement on Sesame Street was brought to light when puppeteer Ryan Dillon uploaded a photo to Instagram with the caption: “Dave Grohl was incredible. Thanks for playing with us! A great way to wrap up this week’s shoot!”

Speaking in 2011, Grohl said: ”I think everybody had Miss Piggy fantasies – she seemed sassy. I always had a thing for Grover, to be honest, and his alter-ego, Super Grover. I had a Super Grover doll growing up.”

The Foos next live show will be at the Intersect Festival in Las Vegas on December 6. Who knows, maybe they’ll break out the Here We Go Song with Big Bird as a special guest.