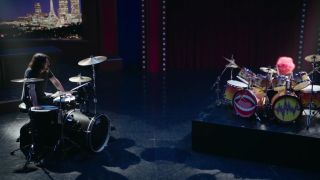 Foo Fighters mainman Dave Grohl has had his drum-off with Animal from the Muppets.

The showdown was announced last month and was aired on ABC TV last night, with the pair going all-out in an effort to best the other – although both concede defeat after trashing their kits after a frantic battle.

Grohl previously appeared in 2011 movie The Muppets as a character called Animool in spoof band The Moopets, fronted by Fozzie Bear. The former Nirvana drummer was only seen for around five seconds, dressed in his own version of Animal’s jumpsuit, collar and chain.

In 1981, Animal battled Buddy Rich in a drum-off on the long-running puppet franchise.