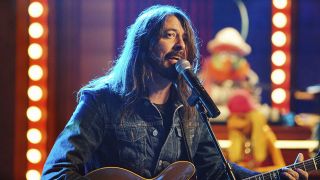 The vocalist, guitarist and drummer will appear on the educational US kids TV show to mark its 50th anniversary in 2019.

Puppeteer Ryan Dillon broke the news on his Instagram feed, showing a shot of Grohl with Big Bird and Elmo with the caption: “Dave Grohl was incredible. Thanks for playing with us! A great way to wrap up this week’s shoot!”

Actor and comedian Paul Scheer has also been named as one of the special guests on the landmark show, which was first broadcast in 1969 and features much-loved characters including Count von Count, Oscar the Grouch, Bert and Ernie, Grover and Cookie Monster.

Speaking in 2011, Grohl said: ”I think everybody had Miss Piggy fantasies – she seemed sassy. I always had a thing for Grover, to be honest, and his alter-ego, Super Grover. I had a Super Grover doll growing up.”

Dave Grohl was incredible. Thanks for playing with us! A great way to wrap up this week’s shoot! #sesame50 #puppeteer #muppeteer #sesamestreet #elmo Ryan Dillon