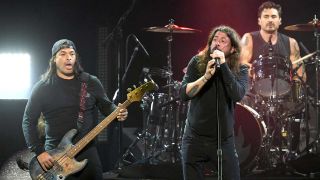 Last night at The Forum in Los Angeles, artists from across the musical world came together for the show The I Am The Highway: A Tribute To Chris Cornell.

US TV star Jimmy Kimmel was on hand to host the event, while members of Soundgarden, Audioslave, Temple Of The Dog, Foo Fighters, Metallica, Pearl Jam, Jane’s Addiction, Melvins, Queens Of The Stone Age, Black Sabbath and more took to the stage to pay tribute to the late vocalist.

Check out the clips below.

Metallica played a four-song set which was followed by an appearance onstage by Cornell’s widow Vicky.

She told the crowd: “It is so important to me that tonight be an intimate gathering of our closest friends and family, shared with his fans who loved him so much. This event showcases his contribution to music history across genres and generations.

“We all know how music can change us, but Chris did something more extraordinary – he changed music and paved the way for so many from Seattle to across the globe

“That legacy and his influence will live for generations to come. I am so proud that, along with his legacy, his philanthropic work continues to grow and flourish.

“Chris would be so very proud. Simply put, to me, and because of all of you, Chris lives on – a music immortal whose passion for helping others is more alive today than ever.”

The concert raised more than a $1 million, with the cash going to the EBMRF (The Epidermolysis Bullosa Medical Research Foundation).

Late last year, a career-spanning collection of Cornell’s work was released, along with a video for the track When Bad Does Good featuring the vocalist’s son Christopher.