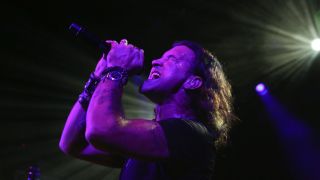 Scott Stapp says it took more than a near fatal fall from a hotel balcony to convince him to get sober.

The Creed frontman could have died from his injuries after plummeting 40 feet at Miami’s Delano hotel in 2006. But in an interview with MusicRadar, he says it wasn’t until 2010 that he finally made an effort to clean up his act.

Stapp says: “That was the beginning. I went through phases after that when I didn’t want to admit I was an addict or an alcoholic, I wanted to find excuses and all of these reasons why I didn’t have to be different, and I could still drink with everybody else.

“Acceptance is key, so it took me probably until 2010 before I finally looked into the mirror and said, ‘You’re an alcoholic and a drug addict.’ And it doesn’t matter that it started out trying to self medicate because of major depression hitting. That’s irrelevant. But in 2010, after white knuckling it and saying, ‘I can stop when I want to,’ I was trying to do the right thing but I wasn’t in recovery. It didn’t start until then.”

Rapper T.I famously found the seriously injured Stapp that night in 2006. It was later confirmed he had a cracked skull, fractured hip, and a broken nose. Stapp credits T.I’s actions in calling for help with saving his life.

Stapp says: “It’s one of those things where you first hear it and you’re like, ‘Yeah, right’. But he saved my life. I didn’t jump, I fell. But I had basically been slowly committing suicide for two or three years up to that point with how I was treating my body with alcohol and drugs.”

The singer is currently touring his solo album Proof Of Life and says more UK dates are being planned for later in the year.