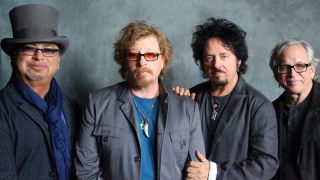 Toto’s David Paich has revealed the band didn’t expect to record their latest album – until they discovered they owed their label one.

They release Toto XIV on March 23 (Monday) via Frontiers Records, ahead of their return to the UK in May.

Paich tells Songfacts: “In 2006, when Falling In Between was released, we thought that might actually be our last album.

“To our pleasant surprise we still owed our record company one more. You don’t know until you actually check.”

The next problem was to decide its content. “You go, ’Do we just put together a lot of odds and ends that we haven’t already recorded?’” says the keyboardist and vocalist.

“We started pulling out our little pieces and everything – and realised that we wanted to get in and write an organic, homegrown Toto record from scratch and really make it count. That’s exactly what we did.”

Paich believes XIV has similarities to their first, fourth and seventh albums because it features the “old gang from the neighbourhood” – Steve Lukather, Steve Porcaro, David Hungate and Joseph Williams.

He adds: “It was really a tribute to our band, that’s been together that long, to come together and put out such a cool album.”

Bassist Mike Porcaro, who was forced to retire in 2007 as a result of illness, died earlier this week at the age of 59.