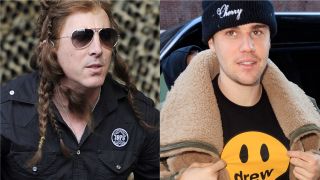 In July this year, pop star Justin Bieber proclaimed his love of Tool by uploaded the lyrics of 10,000 Days track The Pot on Instagram and followed that with a series of short videos showing him playing the track in his car.

She branded Keenan “childish" for his tweet, adding: “He expressed he was a fan of your music. Grew up listening to your music. You must be unhappy with yourself that you want to make people feel small who express their admiration for you.”

But in a new interview with Zane Lowe on his Apple Music Beats 1 show, the vocalist has explained why he reacted the way he did.

Keenan says: “He's probably a good kid. It's the crap that surrounds him. God bless him, he’s a product of those things we’ve spoken about numerous times.

“So when I make a statement like #bummer, it has nothing to do with him – it has to do with the ocean of shit that’s going to follow because he couldn’t just be a quiet Tool fan – he had to say it out loud, and now I know them.

“The flood’s coming from the people that don't get it, and the people that think they do – and they're going to argue with each other and it's going to be stupid. And it doesn't matter. And this poor kid's caught right in the crosshairs, as he was, as he is.”

Last month, mashup supremo DJ Cummerbund tried to heal the rift between the two camps by bringing together Tool’s Parabola with Bieber’s Love Yourself.

Tool are also the cover stars of the latest issue of Metal Hammer magazine, which is on sale now. Click here to find your nearest stockist.