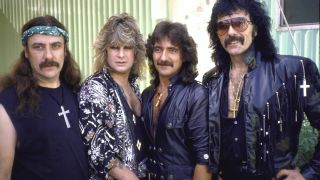 Tony Iommi has spoken about the “surreal” experience of getting back together with his Black Sabbath bandmates for their three-song set at Live Aid in 1985.

The original lineup of Iommi, Ozzy Osbourne, Geezer Butler and Bill Ward hadn’t played together since 1978 when they reunited at Philadelphia’s John F. Kennedy Stadium for the historic show, which was organised to raise relief funds in light of the Ethiopian famine.

And with Live Aid celebrating its 35th anniversary earlier this week, Iommi has reflected on what it was like getting the band back together for the concert.

The guitarist tells SiriusXM: “It was great being with the guys again. It was a bit surreal to be honest because basically I’d been in the studio working. It was an unusual thing for us to come from the studio then suddenly here we are onstage in front of all the people.

“We’d never really done that before. We’ve always rehearsed for a proper show for a while, but this was like a quick rehearsal for an hour and the next day we were on stage.

“It was a bit nervy because you don’t know how things are going to go with the equipment and all the stuff – and we hadn’t been onstage together for so long. You have to sort of suck it and see what’s going to happen.”

Sabbath played three tracks at Live Aid: Children Of The Grave, Iron Man and Paranoid, with the US show, along with the UK concert at London’s Wembley Stadium, watched by millions around the world.

Black Sabbath brought the curtain down on their career with pair of shows in their hometown of Birmingham in February 2017, although both Ozzy and Iommi have expressed an interest in Black Sabbath possibly reuniting in 2022 to mark the Commonwealth Games in Birmingham.