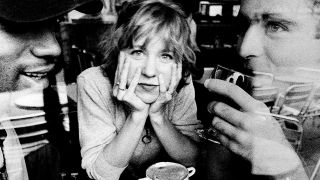 The follow up to 2013's Purgatory/Paradise, Sun Racket will be released on May 22 via Fire Records.

Vocalist and guitarist Kristin Hersh says of the album: "All it asked of us was to commingle two completely disparate sonic vocabularies: one heavy noise, the other delicate music box.

"Turns out we didn’t have to do much. Sun Racket knew what it was doing and pushed us aside, which is always best. After thirty years of playing together, we trust each other implicitly but we trust the music more.”

Drummer David Narcizo adds: “Sun Racket has always been geographical... a transplanted southerner in New England crash landing in California. A West Coast sound at New England scale, dragged back down to the south where the elements got more aggressive but now with deeper roots.”

Throwing Muses have also released the first single from the album, Dark Blue. You can hear the track in full below.