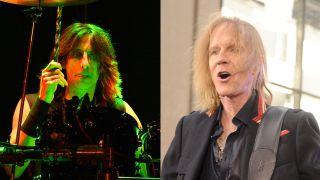 Thin Lizzy have confirmed that Aerosmith bassist Tom Hamilton and Judas Priest drummer Scott Travis will join the band for the shows marking the 30th anniversary of leader Phil Lynott’s death, and the 40th anniversary of classic album Jailbreak.

Scott Gorham and co have six appearances booked over the coming months as they take a break from their Black Star Riders commitments.

Motorhead’s Mikkey Dee had been lined up to play drums, but says: “Due to circumstances that will be announced very soon, I cannot play the shows. I wish I could have been part of this – but the reason will be revealed soon.”

Travis, who’ll be behind the kit for all but one of the concerts, says: “Thin Lizzy are undisputed legends, and to be a small part of their lineage is a humble honour.”

Hamilton reports: “I’m really psyched to be playing these shows during my downtime with Aerosmith. It’ll be great to rock out to their classic songs on stage.”

Europe drummer Ian Haugland will play at the Skogsrojet Festival in Sweden on August 6.