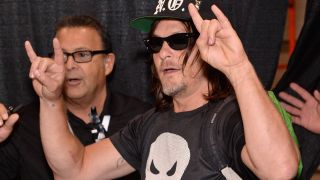 They were playing the city’s Tabernacle venue, when Reedus – best known for his role as Daryl Dixon in the hit AMC series – took to the stage.

Wearing a baseball cap, he appeared alongside bassist Frank Bello during Indians, and played along on bass before throwing his cap into the crowd. Watch the clip below.

The band say: “Atlanta is where we fight ‘em till we can’t fight no more with a special guest Norman Reedus – The Walking Dead with the Walking Dudes.

It’s not the first time Anthrax have been associated with The Walking Dead. In 2014, guitarist Scott Ian appeared as a zombie in the series.

He said at the time: “I’m a massive fan of the show. I just felt like, from the start, ‘God damn it would be the coolest fucking thing if I could get to be a walker.’

“Just to see actor Andrew Lincoln standing there, it’s surreal to watch him kill walkers – and I’m gonna be one of them. I’m just so fucking excited to be part of it.”

Anthrax are currently on the road in support of their 11th studio album For All Kings. They recently issued a studio clip of them covering Pink Floyd classic Comfortably Numb.

10 reasons why The Walking Dead is metal as fuck