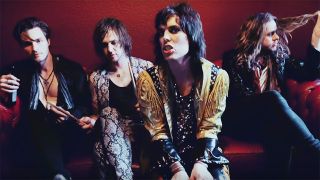 The Struts have released a video for their brand new single titled Body Talks.

It’ll feature on the band’s as-yet-untiled second album, with release details to be revealed in due course.

Spiller says: “It was great to see all of our fans, family and friends. A truly unforgettable experience and so many memories that we captured in our brand new video for Body Talks. Go check it out now! Hope to come back soon! Big love to the UK.”

The band’s debut album Everybody Wants arrived in 2014 and speaking about how their second album compares, Spiller explains to Billboard: “How can I describe it? So, Everybody Wants, was this really firm left hook, and this next album is going to be a knockout right hook punch.

“It's a similar kind of album. It's very much a continuation with what we are and who we are.”

The Struts are currently on tour across North America – a run of shows that also includes appearances with Foo Fighters, with Dave Grohl recently saying about them: “They’re the best opening band we’ve ever had.

“That kid Luke, the singer, it’s unbelievable. He’ll walk out in front of an audience in Tulsa, Oklahoma, where nobody has ever heard of them and by the end of the show he’ll have the entire audience in the palm of his hand.”

Further album details will be announced in due course.