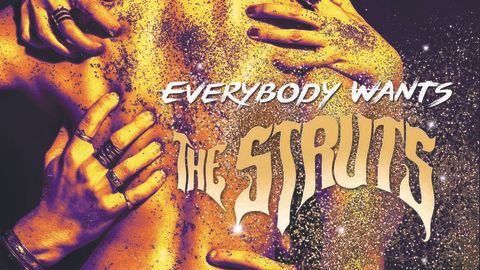 It also happened to be the year that the album you’re reading about right now was first released, only to promptly vanish into thin air like a plane off the coast of Indonesia – the cruellest of fates given its outrageous flamboyance, untouchable swagger and unadulterated musical genius.

Fast-forward two years and The Struts – four preening 20-something peacocks from the least glamorous town in the UK, a place known to its inhabitants as ‘Derby’ – have been fished out of the dumpster, dusted off and thrust back into the glare of the spotlight, confidently brandishing a souped-up version of said debut. Which is why you’re reading about an album that only came out two years ago in the Reissues section. Hey, rules is rules.

In truth, it’s a mystery worthy of Sherlock Holmes as to why The Struts were ignored the first time round. Like The Darkness a decade or more ago they’re a splash of colour in a grey world, the perfect marriage of Queen-sized charisma and huge scarf-waving terrace anthems. And just like Justin Hawkins and co, it’s all delivered with a superstar smirk, an archly arched eyebrow, and the sort of burning ambition that all the knockabout comedy in the world can’t quite mask.

Everybody Wants (or as it appears on the cover, Everybody Wants… The Struts – geddit?) is an unashamed old school rock’n’roll album, which, given mainstream culture’s current disdain for guitars makes The Struts either the bravest or stupidest young band out there. Either way, you’ve gotta hand it to ’em for not giving the slightest of fucks.

But then self-belief is clearly not an issue here. Catchy-as-ebola opening track Roll Up imagines a fantasy Carry On world in which The Struts are bolshy young sultans presiding over a harem of (presumably) dutiful ‘lovelies’. ‘I’ll welcome you in with Lambrini and gin, the perfect of sins,’ coos singer Luke Spiller, one part Freddie Mercury, one part Robin Askwith. By the time it gets to the skyscraping chorus, he’s rolling his ‘r’s for all he’s worth: ‘Rrrroll up, rrrroll up, rrrrrrrrrrroll for satisfaction.’

Those Queen/Mercury comparisons are hard to shake, especially in Spiller’s case. From his ringing voice and proudly protuberant gnashers to the Zandra Rhodes frocks he sports onstage, he’d be a dream casting in the long-gestating biopic of the late singer. In a world of cookie-cutter rock frontman, he’s got the cheek and the sense of humour to flatten the competition. How many other global-rock-stars-in-waiting would chuck in knowing references to both 90s lad’s mags (‘She’s my high street honey’) and British schooyard vernacular (‘She knows what she’s got, she’s so shit hot’), fully aware that both will baffle the inhabitants of Arsegrapes, Iowa? Hats off for the sheer chutzpah of it.

In terms of ambition, The Struts aren’t hiding their light under a bushel – or their influences for that . You can hear Queen more clearly than most, but there are other obvious touchstones. The four-to-the-floor beat and rampant hand-clapping of Put Your Money On Me wouldn’t have sounded out of place sandwiched between The Sweet and Rocks-era Primal Scream on a mythical (and time-twisting) episode of Top Of The Pops.

The moonbooted stomping of The Ol’ Switcheroo and the determindedly ambitious Young Stars (‘I never gave up, I never give in, I kept on rrrrrrrrruning cos I knew I’d win’) are huge singalong anthems with hearts of exploding glitter that nestle somewhere between Slade and their modern analogue Oasis. Most brazen of all is She Makes Me Feel Like, which borrows the title of a Queen deep cut and plain steals the tune of Waterloo Sunset, speeding it up in the faint hope that nobody will notice. Daylight robbery or utter genuis? Frankly, who gives a damn?

Where The Struts truly romp home is on the sheer tuneage front. Unlike most of their young contemporaries, they’re familiar with the lost art of writing a chorus. There are at least six potential hit singles here, which is half-a-dozen more than most other rock bands of their fresh vintage. And they’re smart enough to wrap it up in a slick 21st century production; this is no dusty museum piece or cheap facsimile of other bands’ past glories.

Of course, there’s no guarantee of anything going the way it should and history repeating itself: The Struts could easily end up working the fryer in the Derby branch of Chicken Cottage. But given the fact a) America is warming to them as you read this, and b) they’ve made the greatest (sort-of) debut of 2016(ish), it’s a fairly safe bet to say that rock has finally found its new heroes. And about bleedin’ time.