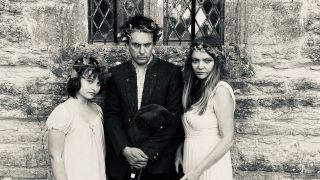 The Mediaeval Babes Trio will play a Glastonbury event this evening, on what would traditionally be the final night of the massive festival.

"Join Mediæval Bæbes Trio, live, in this Vale of Avalon, on what would have been the final day of Glastonbury Festival," the band say. "Katharine Blake welcomes her 11-year old daughter Rosa Marsh, and bagpipe virtuoso/multi-instrumentalist Michæl J York, to frolic with her in this lockdown incarnation. Alongside some old classics, we will be performing songs from out recent album, A Pocketful Of Posies and premiering a song from the forthcoming album Prayers of the Rosary."

You can watch The Mediaeval Babes Trio at 8pm here.

"We'll do a 40-minute set at each (we were going to do one long set but thought you couldn't stand the excitement all in one go!)," the band say. "Let's hope it doesn't rain! Please spread the word and hope to see you on Sunday."

You can watch Mother Black Cap this evening at 7pm here.