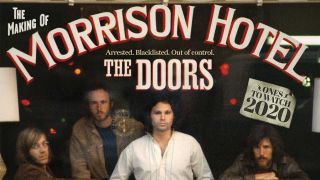 As 2020 rolls by, so will a lot of important anniversaries in the rock world. So in Classic Rock this month we’re taking you back to the first weeks of 1970, when The Doors were about to unleash Morrison Hotel on to an unsuspecting public. Frontman Jim Morrison was navigating a run-in with the law, the band were blacklisted by radio and were in a bit of trouble. Nevertheless, they rose to the challenge and delivered what would be their most successful album in the UK.

Elsewhere we take a walk on the dark side of the 80s as we explore the epic rise of goth in the company of The Mission, The Cult, The Cure and a veritable cast of thousands; we sit down with Suzi Quatro for the Classic Rock Interview; discover how Hendrix’s Band Of Gypsys rewrote rock’s rule book; and so much more.

Classic Albums That Almost Never Were
It was the dawn of the 70s, a period that delivered some now iconic albums. So why were they dismissed at the time?

Alice Cooper
How a garage band from Phoenix with stars in their eyes moved to LA, and the story of their album Easy Action.

Corky Laing
Like most young budding rock musicians, he had a dream. Unlike most, his came true, as he steadily scaled the rock’n’roll mountain and made it to the very top.

Band Of Gypsys
In January 1970, Jimi Hendrix pulled the plug on stardom to chase a funkier, freer direction. His short-lived new trio also helped redefine the nature of the rock gig.

The Flying Burrito Brothers
How these psychedelic outlaws mixed rock with country and in the process paved the way for the Eagles and more.

Suzi Quatro
She could have ended up a classical pianist, but then one day she picked up a bass guitar, and found herself on the road that would lead to her becoming a glam-rock icon. Suzi talks about this and much more in the Classic Rock Interview.

Glorious Sons
These blue-collar poets and shitkicking rockers for the new age are on anthemic form with their brilliant new album.

Goth: An Oral History
As punk’s light faded, something new began to stir in the darkness. After goth’s early days as a look/fashion/scene rather than a music genre came some of the greatest music of the 80s. This is its story.

No-Man
Tim Bowness and Steven Wilson take us inside the surprising world of the masters of ambient, melancholic alt.rock .

The Ones To Watch
Our top tips for the coming year (and indeed the decade).

What's on the FREE CD?

Let It Roll, Baby, Roll
10 terrific tunes from some of the best new bands around, including Certain Stars,The Grimtones, The Sonic Jewels, Trash Caste, The Savage Kind and more.

The Stories Behind The Songs: Argent
“I don’t care that most people think it’s a Kiss song,” its writer, Russ Ballard, says of God Gave Rock And Roll To You.

Q&A: Steve Harris
The Iron Maiden and British Lion bassist on having too many ideas, being a tongue-tied fanboy and retirement.

Buyer’s Guide: Devin Townsend
Where to begin with a catalogue that spans extreme metal, sublime prog-scapes, colossal riffs and extra-terrestrials.

The Soundtrack Of My Life: Kenny Wayne Shepherd
The blues-rock guitarist/singer on the special records, artists and gigs that are of lasting importance to him.

Classic Rock 271 is in UK newsagents now and available to buy online. You can subscribe to Classic Rock below.