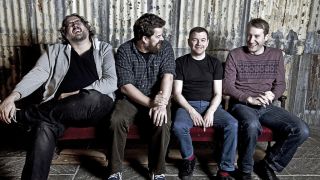 The Fierce And The Dead will release an EP entitled Magnet on August 14.

Hear lead track Magnet In Your Face – their first fresh material in two years – below.

Pre-ordering is available now for the five-track release, which includes three new songs, a live rehearsal recording and a retake of Flint from their debut album. A second rehearsal track appears on the CD edition as a bonus.

Guitarist Matt Stevens says: “This EP represents a different sound for us. It’s important to keep moving forward. It’s more joyous and intense, with bigger riffs and more of an electronic feel.”

Bassist Keavin Feazy adds: “We’re back to sounding like the bands we grew up with. Every record we’ve put out has its own character and story, with a different reality for each.”