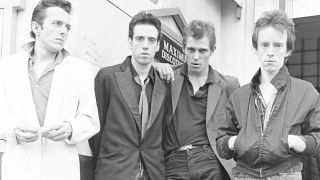 An exhibition dedicated to The Clash is to open its doors later this year to mark the 40th anniversary of the London Calling album.

The Clash: London Calling will be free to enter and will be held at the Museum Of London from November 15 and run through until the spring of 2020.

More than 100 items from the band’s archives will be on display, including draft lyrics, stage-worn clothes, a collection of photographs and film footage which will give fans a fresh insight into the making of the 1979 album.

Senior curator of fashion and decorative arts at the Museum Of London Beatrice Behlen says: “London Calling is The Clash’s defining album – a rallying call for Londoners and people around the world.

“The album’s lyrics reflected contemporary concerns, many of which are still relevant today, as it moved away from traditional punk by adopting and reworking much wider musical influences.

“At the Museum Of London, we tell the stories of our capital through the objects and memories of the people who have lived here. This display will provide a brand new, exciting and vibrant take on this, showcasing rarely seen personal objects and telling the incredible story of how London Calling was, and for many still is, the sound of a generation.”

Among the items on display will be Paul Simonon’s Fender Precision Bass which he famously smashed at The Palladium in New York City – a moment that was captured by photographer Pennie Smith and used on the iconic album cover, Joe Strummer's notebook from the year along with his typewriter, and the only remaining pair of Topper Headon’s drum sticks from the era.

To coincide with the exhibition’s opening, Sony Music will release the London Calling Scrapbook – a 120-page companion publication which will feature London Calling on CD, handwritten lyrics, notes, pictures and previously unpublished material from 1979.