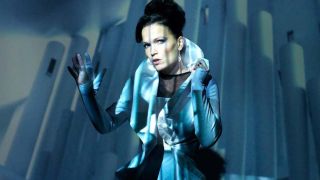 Her last studio release was 2013’s Colours In The Dark, while the Finnish vocalist issued the live album Luna Park Ride last month.

Now she’s turned her attention to Ave Maria – a prayer that has been set to music in over 4000 songs.

A statement reads: “Tarja Turunen breathes life into some of the most loved and rare songs of Paolo Tosti, David Popper, Astor Piazzolla, and of course Johann Sebastian Bach/Charles Gounod, among others.”

The album was recorded at the Lakeuden Risti Church in Seinajoki, Finland and features organ, cello and harp, while the record closes with Turunen’s own take on the traditional prayer.

It’ll be released on Limited Super Audio CD, vinyl and digitally via earMUSIC.

In addition, Turunen will perform the album on the 10-date Ave Maria Christmas Tour, which starts in the Czech Republic on December 4.