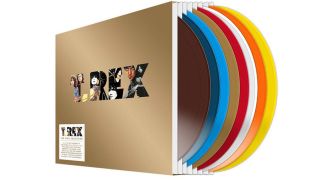 An eight-disc vinyl box set of T. Rex’s albums will go on sale in November.

T. Rex: The Vinyl Collection features all eight of the band’s albums, starting with 1970’s T. Rex and ending with 1977 album Dandy In The Underworld, and will be released via Edsel on November 3.

Two versions of the box set will be launched: A standard 180g black vinyl collection and a limited edition coloured vinyl compilation, which is limited to 500 units worldwide.

A CD version will also be released, featuring all eight studio albums plus two bonus discs of singles and non-album tracks.

Zinc Alloy And The Hidden Riders Of Tomorrow

Dandy In The Underworld