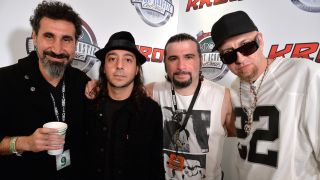 System Of A Down drummer John Dolmayan has quashed hopes of a new album from the band ever being released.

Speaking to KROQ, Dolmayan said that “certain members” were holding the process back, despite the band reportedly having written around 15 songs for the long-awaited follow-up to 2005’s Hypnotize and Mezmerize albums.

He continued: “I don’t know if it’s ever gonna happen at this point. I don’t like saying that but you got to live in the realm of reality and anything we do outside of System is never gonna anywhere be close to System. System is the best thing that anybody in System will ever do. But we still do the other things.”

Dolmayan’s comments echo System Of A Down guitarist Daron Malakian, who recently said that “creative differences” had caused attempts to record a new album to fall apart.

“I couldn’t say ever, but as of right now, it’s not looking like we’re doing something together soon,” said Malakian. “There are some creative differences as well on what direction each one of us wants to take the next System album, if that ever happens.”

Despite the absence of a new album, System Of A Down have announced a handful of US dates in October. Malakian also reactivated his long-dormant Scars On Broadway project, who release a new album, Dictator, on July 20.